The First One To Go 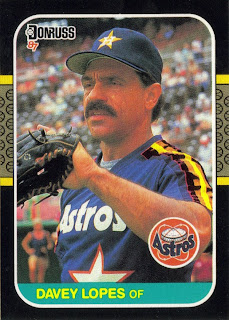 The Dodgers, led by their much celebrated infield -- the one that had been together as a foursome for 8½ years -- were fresh off a World Series championship in 1981. The group had achieved much success together -- four pennants and one championship in an 8-year span. However, the team was getting older, especially the infield. Here were the ages heading into 1982 (baseball ages, meaning their age as of June 30):

The writing was on the wall, with heralded minor leaguers waiting in the wings, that the infield would not be together much longer. Davey Lopes had struggled greatly in 1981. He was injured and missed over 50 games, almost half of the strike-shortened year. He only hit .206/.289/.285, a mere 66 OPS+ (although much better than 2008 Andruw Jones). 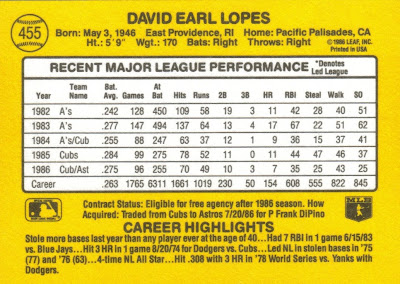 What stands out from Lopes' 1987 Donruss card is his position. Lopes is remembered as a 2B, but he was converted from the outfield while in the minors with the Dodgers. Here are his games started by position after leaving the Dodgers:

After starting 16 games at 2B in 1984, he never started another game at 2B again. I do wish for his picture here Lopes would have been wearing one of the classic rainbow Astros uniforms, but this will have to do.

good to see some davey! the last one of the four to get to the bigs, he was the oldest and lasted the longest age wise anyway.

on another note, i was surprised to see the toaster die after jon moved to the latimes. i wonder how this season will go for dodger thoughts.